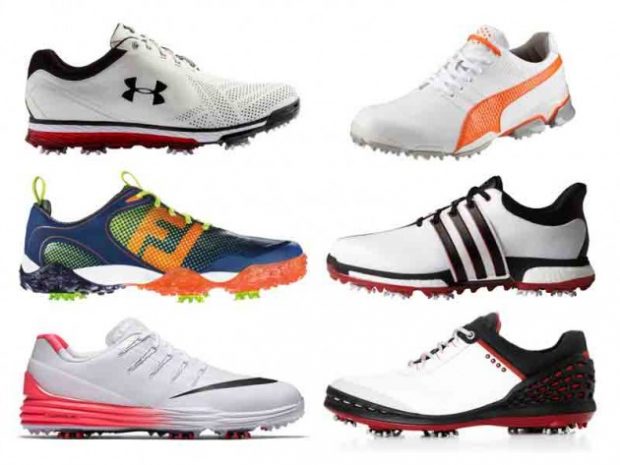 Golf doesn’t really require a specific type of golf shoes for you to wear although it’s recommended to wear proper golf shoes with hard or soft spikes in order to have the right amount of grip during your swing.

However, even though golf shoes are almost never mandatory, the good ones have the potential to significantly improve your performance on the course. The only problem is, the long list of golf shoes brands out there can sometimes make it hard to distinguish the good from the average. Fortunately, you’ll be going through 6 of the best brands below, giving you an easier time picking up a pair that would suit your needs.

Please click through at the end of each brand section to find the different models, specifications, and prices.

FootJoy started as a humble shoe company called Burt and Packard, which was eventually renamed as Field and Flint Company. But, it wasn’t until the 1920’s that the company first introduced its golf shoes lineup, called FootJoy. With the help of Walter Hagen, the FootJoy line became the official shoe brand for the American Ryder Cup Team, giving the company quite the exposure and endorsement.

After years of operation and success, Field and Flint officially became FootJoy Inc., back in 1970. It then went on to make several deals, partnerships, investments, and etc., which subsequently placed the company among the big leagues.

Not satisfied with its transfer at the forefront of the golf equipment market, FootJoy decided to branch out. This lead FootJoy to creating one of, if not, the most successful golf glove lineup. But, the company didn’t neglect its roots and continued its relentless pursuit of the best golf footwear in the business.

Through innovation and sheer genius, the company finally unveiled its waterproof shoe lineup, DryJoys®, in 1989. Countless innovations followed, and by 2015, FootJoy had already built a huge reputation that equals none. Golf shoes like the Hyperflex series, and the latest 2016 FreeStyle, among others, continue to keep the company at the #1 spot in its category, even up to this day.

When a world-renowned shoemaker company enters the field of golf, the end result is nothing short of astonishing. Equipped with years of experience and comprehensive knowledge on shoe creation, it didn’t take much effort for Adidas to transition into the golf shoe industry.

In 1949 Germany, Adi Dassler, who was a shoe designer that specialized in athletic footwear, decided to test his mettle yet again in the sports shoe business, thus establishing Adidas. Through countless brainstorming and redesigns, Adidas eventually debuted its 3-stripes shoe look, which has now become an iconic distinction for the company.

To further augment its status in the golf goods industry, Adidas started taking young and promising golfers under its wings. Professionals like Sergio Garcia, Natalie Gulbis, Justine Rose, and plenty more, helped Adidas rise in the field of golf. And with products like the Climaproof series and Tour 360 Adidas golf shoes lineup, the company quickly won over fans and golf enthusiasts alike.

Another big move that Adidas made is partnering with the already-famous golf equipment company called TaylorMade. Although both companies now share the same family, the two still focuses on each of their area of expertise, but with some collaboration here and there. This separate yet mutual relationship is what allowed Adidas to continue making first-class golf shoes, while still staying relevant to their other golf gears.

The moment Puma started as a company, it has always prioritized performance over fashion. Yet somehow, the company is still able to make both works. This principle is what made Puma apparels look good and feel great.

From its modest beginnings back in 1948, Puma now covers up to 120 countries in product distribution, employs thousands upon thousands of employees, and most importantly, keep fans coming back for more. And with collaborations with famous fashion labels the likes of Sergio Rossi and Alexander McQueen, to name a few, Puma gets to focus more in their product’s execution while still excelling in aesthetics.

One of the reasons why Puma flourished in the sports footwear market is because of its constant innovation in shoe soles. Therefore, it’s really not a surprised for Puma’s golf footwear lineup to also benefit from such ingenuity. The Titantour Ignite, Biodrive, and Titanlite, golf shoe lines can all attest to that.

Although Puma already established its place at the frontline of the golf trade, that didn’t stop the company from seeking more opportunities. And on one momentous day, back in March 2010, Puma acquired Cobra Golf, a partnership that would later be called Cobra Puma Golf. This acquisition further bolstered Puma’s status in the golf business world.

Karl Toosbuy, the founder of Ecco, started young as a shoemaker in a company located in Copenhagen. Through hard work and conviction, he quickly rose to the top of the ranks and ended up in a managerial position.

However, he wanted to do so much more. And the only way he thought he could do that is to work on his own company. So, with only his family at his side, and the money he got from selling his property, he moved to Denmark and later founded Ecco.

Armed with just a handful of employees and his passion for shoemaking, Ecco somewhat started slow, which is to be expected from a small team. But, in 1970, Ecco made its big break in the footgear industry when it launched its comfortable shoe lineup.

Halfway through the 1990’s, Ecco finally decided to test their capacity in the realm of golf. And by staying true to its founder’s vision and philosophy, Ecco also managed to dominate the golf shoe market. Furthermore, Ecco is one of the only few shoe companies that can take pride in having handled their footwear’s entire creation process, from factory to retail.

Nike was already renowned in the world of foot apparel, both in casual and athletics. And in 1984, the company launched its golf shoes and shirt lineups. Although the latter was limited in production, the former on the other hand instantly caught the players’ attention.

Following inspiration from its previous strategies, Nike efficiently found the right individuals to carry their brand into the world of competitive golf, in just after a year. Seve Ballesteros and Curtis Strange were two of such people. The two then went on to make huge plays for the company. And in 1988/1989, Mr. Strange achieved a back-to-back U.S. Open win for Nike, propelling the company’s status even higher, along with the iconic swoosh brand logo.

While it seemed like Nike was already at the top of its game, the company believed that it was just getting started. This was proven true when Nike took in Tiger Woods under a bold $40 million deal, which made numerous headlines. Tiger Woods, with his famous “Hello World” tagline, then became one of the most prominent figures in the golfing scene. And since then, the whole dynamic of Nike was never the same.

Unfortunately for Nike golf gear enthusiasts, it was recently announced that the company will no longer produce golf equipment, such as golf bags, clubs, golf balls, and the likes. But, this just means that the brand can concentrate more on their golf apparels, ensuring better and even more top-quality golf shoes to come. Regardless, there is no doubt that Nike will still remain as one of the best company to ever grace the golf market.

As a military man and an entrepreneur, Ely Callaway Jr. has always remained unwavering and decisive in every opportunity he encounters. While he could’ve easily lived the rest of his life in comfort, through his gainful investments in the textile business and by selling his vineyard, Ely chose to pursue another venture. This time, he picked golf, which he played a lot after his second retirement.

What started as a small firm selling golf clubs, Callaway Hickory Sticks USA has now become one of the largest and most successful golf equipment manufacturers, worldwide. After the company perfected its creation of golf clubs, Callaway eventually branched out to other golf tools. And finally, to apparels like golf shoes and eyewear.

Admittedly, Callaway’s footwear department is not enough to overtake other big brands that specialize in the same category. Despite this, Callaway still produces some of the highest performing, comfortable, and well-rounded, golf shoes in the current marketplace.

Whether you’re a man or a woman, you can never go wrong in wearing Callaway-made golf shoes. Items like the Callaway X Series, Callaway Chev Family, and Callaway Del Mar and Sky lineups, are the best-selling golf shoes that this brand has to offer.

Additionally, technologies such as the Big Bertha Cleat®, Superfeet™ insoles, and Engineered Traction System (ETS™), among plenty more, all contribute to Callaway’s success in the golf shoe industry.