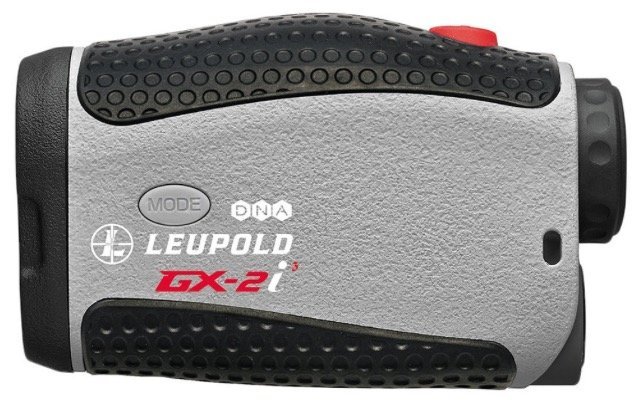 The Leupold GX-2i3 golf rangefinder is one of five models under the Leupold GX lineup. In terms of standard specs and general construction, this unit is similar to the GX-1i3, which why both are commonly compared. One direct visual distinction between the two is in the color of their main casing.

However, feature-wise, the Leupold GX-2i3 has the advantage of an inclinometer and Leupold’s innovative TRG® (True Golf Range™) technology, which you can find more about below. If you are looking for a good rangefinder that goes beyond its standard conventions, but without draining your bank account dry, then consider investing in this machine.

The GX-2i3 by Leupold measures 4 x 2.75 x 1.5 inches and has a total weight of 6.2 oz. Furthermore, the golf rangefinder is waterproof and comes with a 5-year warranty. In terms of battery life, a single CR-2 can supply approximately more than 7000 actuations.

Just like the GX-1i3, the GX-2i3 rangefinder also bears similar basic features, namely: 7 selectable aiming reticles, a scan mode, fog mode, prism lock, and a 6x magnification power. You can also freely swap between yards or meters via the Quick Set Menu. Exclusive to this model is the inclinometer and the TGR technologies. 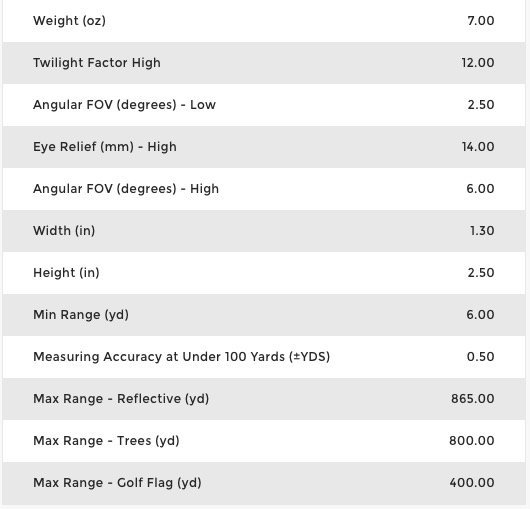 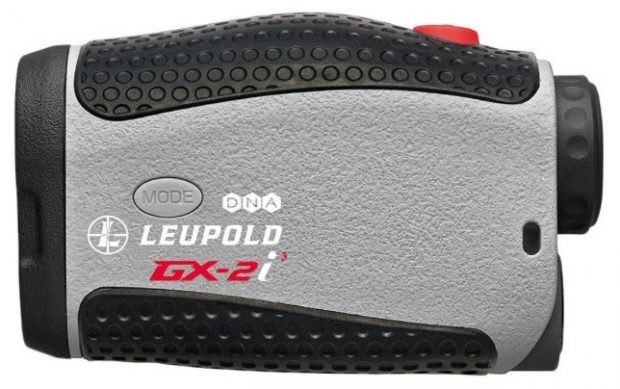 If you inspect the outside of the Leupold GX-2i3, you will find a total of two buttons. One is the POWER input, which is located at the top. The other button is the MODE input, which is used for configuring the device’s various functions and is situated on the left side.

At the upper back of the unit, you will see the rubber eyepiece, and below it is the battery compartment. Before you power the unit, it is recommended that you first adjust the focus of the eyepiece, since clarity can vary between models right out of the box. But, you can still do this while operating the rangefinder.

To make the adjustments, turn the eyepiece diopter left or right until the image becomes clear, or when your target is in focus. Once an optimal view is achieved, you can now turn on the rangefinder by pressing the power button once, as confirmed by an active display.

By default, you should see a crosshair-like icon in the middle of the screen, along with the battery meter at the bottommost section and the metric of measurement at the right. Note that the metric value (Y/M) will relocate next to the measured distance after the laser has been fired.

If you wish to try the product right away after turning it on, simply aim at your target while keeping its center in the reticle as much as possible, and then press the power button again to fire the laser. The distance will then emerge at the top of the reticle. Keep in mind that even though the product is naturally accurate, the steadiness of your hand can still influence the shot.

You can also do a scan at any given time, which is more convenient than having to switch to a dedicated mode, as seen on some brands. You can perform scanning by holding down the power/fire button as you go through your potential targets, and the measurements will automatically update. This is helpful in differentiating the pin closest to you from background clutter, which is further improved by the PinHunter 3 laser technology.

There are multiple modes that you can switch to in this instrument. In order to do so, you must press and hold the MODE button for at 2 seconds to access the Quick Set Menu™. You then can cycle through the modes by pressing the same button again, once each time.

To activate or deactivate any mode, press the power button while in that particular option, and an “On” or “Off” symbol will light up. Unfortunately, you can only advance through each mode in one order, making it impossible to select a specific function directly. Although not a deal-breaker, having to circle back because you skipped a mode can sometimes feel cumbersome.

Additionally, you can do a factory reset by holding both the power and mode buttons together for at least 10 seconds. This will configure the device back to its original state, erasing all changes made.

Moreover, you can select from up to 7 different targeting reticles. Try each one and see which complements your aim the most.

As for saving your alterations, there are two ways it can be done. The first is by manually exiting the Quick Set Menu, through the same process as you entered it (the 2-second hold). The other method is by leaving the unit idle for up to 30 seconds.

After such time has passed, the equipment will automatically turn itself off, saving all changes made. If you still have other modifications to make, just press the mode button once to continue from where you left off.

Fog mode is one of several functions in this rangefinder, which is best used during unfavorable weathers, wherein certain elements can interfere with the readings. This technology will provide the distance to the last target you measured, provided you range the base of the flag. Remember to turn this off when the golf course is clear, or it might affect normal interpretations.

Another feature of the unit that you can take advantage of, is the True Golf Range (TGR). If enabled, the usual straight line of sight distance is replaced with an adjusted value that has taken the elevation and downslope distances to your target into account. This is exceptionally useful for adjusting your angle of approach towards targets that have plenty of hills.

A “TGR” symbol will pop up in the upper left corner of the display to validate that you are using this mode. Furthermore, factors like temperature and altitude can also influence the accuracy of TGR gauging, especially if you play in high altitude courses or low lying fields.

Altitude, however, is constantly measured in feet. Regrettably, the Leupold GX-2i3 rangefinder does not have built-in sensors for detecting temperature and altitude, meaning you have to input each manually. Fortunately, the unit does save your adjustments, so you do not have to keep tweaking, as long as you play in geographically identical areas.

Last but not least, turning on TGR also activates the Club Selector feature, represented by a “CLUB” icon in the left corner of the display. This innovation will recommend a certain iron number that will likely benefit your shot the most, based on several factors like current distance, shot angle, and atmosphere, among others. However, certain arrangements need to be done beforehand, which you can learn about in the manual.

The amount of advancements found in the Leupold GX-2i3 golf rangefinder is simply staggering. From slope measurements, to club recommendations, and groundbreaking ranging algorithms, just to name a few, it is hard not to be enticed by the Leupold GX-2i3. Although it is not exactly the cheapest, it can certainly go toe to toe with some other rangefinder models that are far more expensive.

This site uses Akismet to reduce spam. Learn how your comment data is processed.