If you need a straightforward golf GPS model, you don’t need to look further since the Bushnell NEO Ghost golf GPS device will keep you covered. The model offers front, back and center green distances by precise GPS technique on its LCD interface and displays up to 4 hazard distances for each hole.

This article will break down the model’s features plus its advantages and disadvantages.

The Neo Ghost of Bushnell includes preloaded 33,000 golf courses without the yearly fees and downloads. Customers will find 6 buttons located on the device, each button equipped with a purpose to let its users navigate menus smoothly, create selections and keep track of shot distances. It claims to provide 14 hours of battery life too.

Other specifications are as follows: 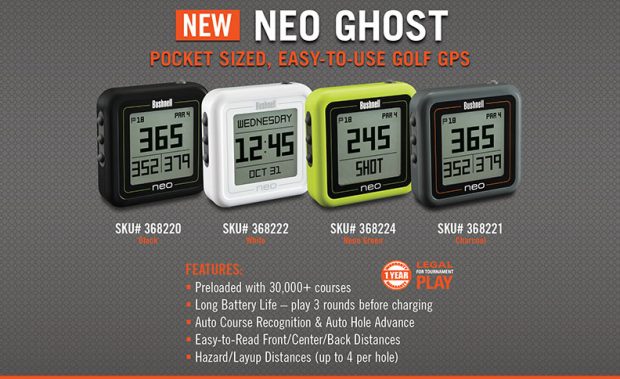 The Bushnell company has been providing the world its range of superior sports optics for over 65 years running. The brand’s aim is to offer only the most top-rate quality, most dependable and reasonably priced products for every active pursuer of outdoor sports. Bushnell has won awards for some of their products and still continues to provide nothing but fine, high-performance units.

The Neo Ghost features hole advance and auto course recognition, noticeable yardage numbers that are pretty simple to read and up to 4 hazard distances for each hole. It has a convenient interface plus a multi-function clip and USB charging cable to make the device handier. The model is available in choice colors of black, green, white and charcoal.

The dimension of this Bushnell Neo Ghost golf GPS is favorable for those who want a simple GPS product for golfing pursuits. Its rounded angles make sliding the device in and out of your pocket easy, there’s no tugging involved and it’s pretty light as well. The interface of the unit is utilitarian with easy-to-read yardages.

Once the user switches the golf GPS handheld on, the device will display the default time and date and then the user can look for courses by pressing on the Menu button located on the right. He or she can select Play Golf with the Select option. It takes roughly 40 seconds to search for the course users are about to play and at times it can get a bit longer.

By clicking on the Select button located on the left over the course of a hole, it will provide the distances (up to four hazards). The Neo Ghost will proceed routinely from one hole to the next. If ever it gets lost, users can apply the Up and Down buttons on the left side to scroll throughout the holes.

The big number on the display of the Bushnell Neo Ghost represents the center of the green while the smaller ones denote the green’s front and back yardages. Other useful information for golfers includes hazard yardages and it also knows what accurate yardage should be taken to deal with a bunker.

The Bushnell Neo Ghost GPS device has a conventional micro-USB port used for charging with a standard micro-USB cable. Fully charged, the model can be used for up to 14 hours.

As mentioned earlier, the unit once it’s charged to its fullest did deliver to its claims. Several users said that the Bushnell Neo Ghost was able to withstand several rounds compared to other models from rival brands, which barely survived a single round.

According other users, the model was simple to use and its sizable figures on the screen were easy to read that even long-sighted individuals might catch the numbers. Its 33,000 preloaded courses was a big help too. Several said as well that the yardage it provided were decently precise.

The model has its drawbacks, according to a few users. One said that the device kept shutting down thrice over the course of an 18-hole round. He had no choice but to reprogram the whole thing to the course and the hole he was getting into and it was bothersome because the unit was fully charged.

Another user said that the clip could be a bit on the problematic side because it was hard to put back on. The unit cannot be freed from its accompanying clip with no trouble so he has to get rid of the entire unit then make some effort putting it all back on again. 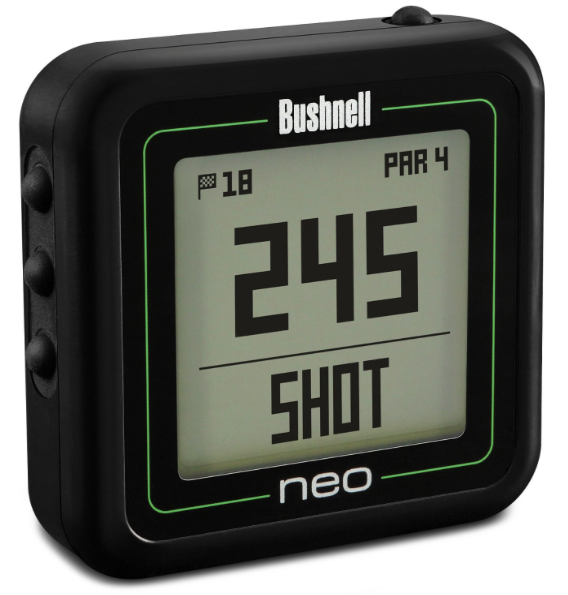 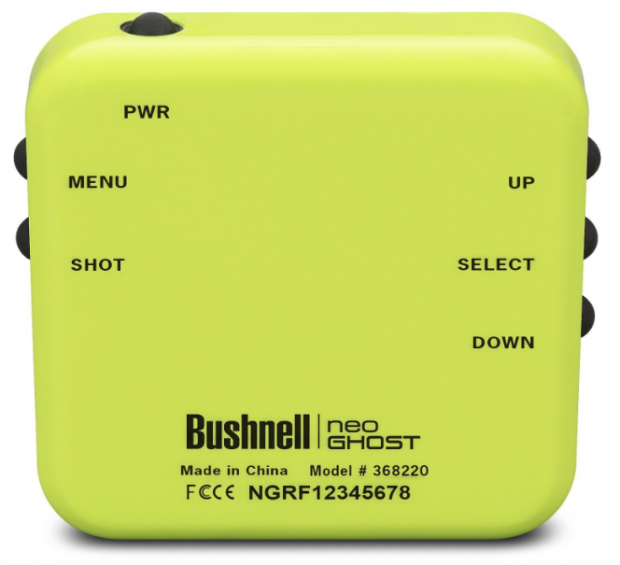 The Neo Ghost is a reasonably priced golf GPS product that is, as others have said, is easy to use and provides accurate yardages. Apart from its capability of providing reliable information, is a functional, great-looking unit that is light not only on the wallet but on the pockets as well, charges without difficulty and lasts through plenty of rounds. Golfers who want improvement on their game should check out this device; the positive response from avid golfers is proof that the Neo Ghost of Bushnell delivers.